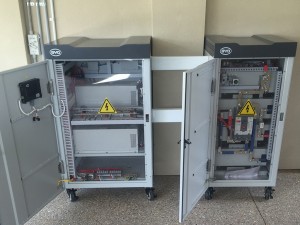 An academic paper on the Josh’s House distributed energy storage system (DESS) has been accepted for publication by the respected Journal of Renewable Energy and Environmental Sustainability.

The DESS at Josh’s House was one of the first on the WA grid, and certainly the most comprehensively monitored. It was connected to the house’s monitoring system to enable in-depth analysis of performance in the context of a functioning family home. The paper showed that the DESS, in combination with the relatively modest 3 kilowatt photovoltaic system, enabled the home to meet 81% of its energy needs without input from the grid. However, it also showed a much higher reduction in PV exports than expected after the DESS was installed, leading to an examination of the way efficiency is defined and measured for these systems.

Titled Josh’s House – A More Even Relationship with the Grid, the paper was delivered by JBA’s Mark Taylor in February 2017 at the World Renewable Energy Congress and it has raised considerable interest. The team intend to follow up with further real-world analysis of energy storage systems and the practicalities of optimising performance. The hope is to support these systems to realise the promise of enabling continued growth of renewable energy and de-carbonising of the energy system.

Publication: Josh’s House – A More Even Relationship with the Grid.